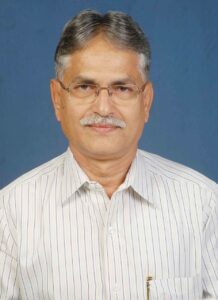 Com K. Sreenivas Reddy was born in Pallepahad village of Nalgonda district. Com. Sreenivas Reddy was very active in student politics and served All India Student Federation (AISF) in different capacities. After his graduation in Hyderabad he entered the profession of journalism at an early age of 21. Sreenivas Reddy joined Visalandhra, an organ of Communist party of India (CPI) as a reporter and retired there as Editor. Sreenivas Reddy, who worked as Generathel Secretary and President of APUWJ for long time strived for the protection of rights and welfare of journalists in the state.

He worked as both Secretary- General and President of Indian Journalists Union for more than two decades. During his tenure he played a pivotal role in journalist trade union movement in the country. He served as member of Press Council of India for two terms. During this time he headed a committee on Paid news syndrome and submitted a report which had received applause from one and all. A thorough professional with ethical values he has been straddling the field of journalism for five decades. He also toured the country and abroad extensively as part of both profession and trade unionism. Sreenivas Reddy received many awards including ‘Life time achievement award’ from the government of undevided Andhra Pradesh.

After retirement from Vishalandhra, Sreenivas Reddy founded ‘Mana Telangana’ Telugu daily and is presently working as Editor for ‘Prajapaksham’ telugu daily. Sreenivas Reddy played an important role in constituting the Press Academy of Andhra Pradesh and he served it as it’s first chairman. During his term he oversaw training activity involving thousands of journalists. He is the founder chairman of Media Education Foundation, India (MEFI).

Hindi journalism day on 31st May IJU affiliated unions in…