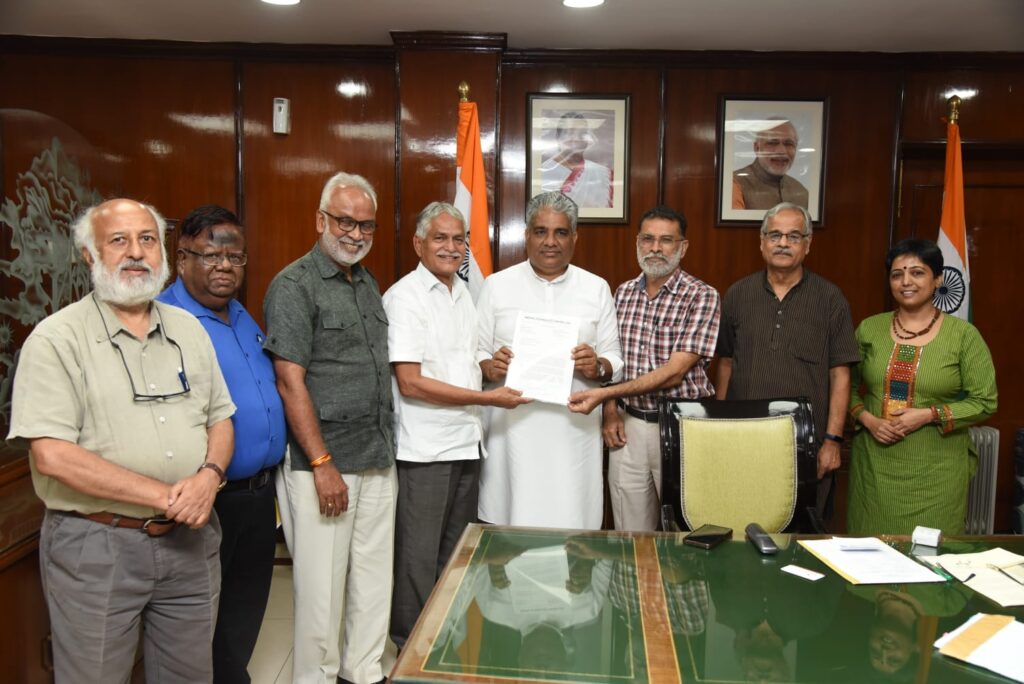 New Delhi- 3 September 2022, A delegation of Press Association, Working News Cameraman’s Association and Indian Journalists Union today met the Union Minister for Labour and Employment Mr Bhupender Yadav in his office in New Delhi today. The Associations and Unions  drew the Government’s attention to the  critical situation faced by the journalist fraternity in the country on the wake of the problem arising after the repealing of The Working Journalists and other Newspaper Employees (Condition of Service) and Miscellaneous Provision Act, 1955 and The Working Journalists (Fixation of Rates of Wages) Act, 1958. The associations and the union felt this will not only adversely impact the working conditions of the journalists but also affect the freedom of the press in a serious way. The delegation compromised of Press Association- President C. K. Nayak, Treasurer Laxmi Devi and Press Council member Jaishankar Gupta, Indian Journalists Union (IJU) President K. Sreenivas Reddy, Secretary General Balwinder Singh Jammu and Working News Cameramen’s Association (WNCA) President S. N. Sinha, General Secretary Sondeep Shankar.

With the government finalising rules for the new labour codes that apply to Journalists as well, the fraternity of journalists were concerned that these New Codes are at the cost of the law governing Working Journalists acts will not only curtailing the freedom of press but effects their service condition also.   .After the repealing of these two Acts, working journalists are now governed by the new codes, which in their definition of working journalists included not only Newspapers establishment but other establishments relating to any electronic media or digital media. These codes do not consider designations that currently persist in these media establishments.

Some special provisions given to working journalists through WJA are now entirely repealed. Hence, in future, working journalists will be treated as any other labour force in the country without considering the creative nature of the journalistic work. The provisions of the Industrial Disputes Act, 1947 apply to or in relation to, working journalists as they apply to workmen within the meaning of that Act has gone and in case of dispute, WJ cannot claim to be a worker and get any relief from a court of law.  the associations and the unions pointed out.

The journalists organizations also requested the minister to consider payment of pension by the central government to the senior journalists in the pattern of states governments. They request the Union Labour Minister to ensure that the special provisions of the Working Journalist Act should be protected to ensure the freedom and respect for the fourth pillar. The Union Labour Minister Shri Bhupendra Yadev gave a patient hearing on the all issues and immediately instructed the ministry officials to find out ways to resolve these important issues concerning the journalists’ fraternity.

Hindi journalism day on 31st May IJU affiliated unions in…